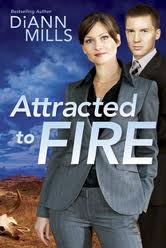 I’ll admit it. I’m a sucker for a free book but when it’s a book by DiAnn Mills that totally ups the appeal. Attracted to Fire is a romantic suspense in her compelling style that makes it hard to set the book, the characters or the story aside until you have turned the final page (or swiped it if you have an e-reader).

No FBI in this book, but Secret Service agents with FBI wanna-be tendencies. Special Agent Meghan Connor’s is one assignment away from her coveted dream of one day protecting the President of the United States. The President hand-pics her for his security detail for his rebellious daughter who struggles with addictions and demons no one can fathom.  Not the worst job in the world unless you are working under the leadership of Special Agent in Charge Ash Zinders who has a belief that women do not belong in the Secret Service and who is also gunning for the roll of protecting the President when this assignment has been completed. Ash is known as a perfectionist and detail oriented. Nothing escapes his notice, even an attractive and highly competent female agent he longs to loathe but grows to respect.

A normal protective duty doesn’t include the kinds of threats and security breaches that they encounter on a secluded ranch in Texas. Assuming the threat is drug related they are slow to realize that the threat is far more powerful than they anticipated. And far more deadly. Soon Ash comes to realize the only safe person to process with is Meghan as they try to uncover the clues as to why the President’s daughter is in so much danger. The danger draws them together as forces threaten to rip them apart.

Faith is central to this story as well. I love how the characters who believe struggle to trust God in their circumstances and can still spur each other on in the midst of such evil swirling around them.

DiAnn Mills is a master of suspense and keeps you guessing who the enemy is and even up to the end wondering just how these two agents, not knowing who to trust, will over come the enemy, protect their charge and the President.  I loved this story. It was riveting. I can’t wait to read more by this fabulous author!

I did have a complaint on my reviews. I do put links to the books on Amazon. However, if you find the book cheaper elsewhere, then by all means by it there. I won’t accept responsibility for your purchasing choices and shopping around is always a good thing although authors deserve compensation for writing such fabulous books and we should never begrudge them that.