To Whisper Her Name is as Post-Civil War Southern fictional story that takes place on a very real to life Belle Meade Plantation. That location is the star of the novel and a character in it’s own right. 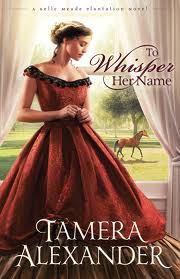 Olivia Aberdeen has suffered the humiliation of her brutal husband being branded a traitor to the South and publicly disgraced and murdered. Although ignorant of his misdeeds she is branded with the tint of scandal. Turned from her home she finds refuge at Belle Meade Plantation where her mother’s dearest friend lives. Unfortunately it is also a horse stud farm and Olivia is deathly afraid of horses.

Nothing goes quite as planned when Ridley Cooper comes to Belle Meade to learn about horses  from Bob Greene, a man he met during the war while fighting for the North. Having to keep his part in the war a secret while working with the stud farm and for a General for the Southern Army is a challenge for the strong-willed Ridley. But he hasn’t met strong until he’s run into the prim and proper widow, Olivia. As days turn into weeks and months, Ridley’s dreams of heading West are put on hold while Olivia fears she will once again be “sold” to another husband to help benefit the Belle Meade plantation.

This is a story rich in details and slow in laying out the story and it’s conflicts. It is well and beautifully written. The biggest boldest faith comes from the Negroes on the plantation, the rest is not quite as deep. It is a great look at how some white people, even after the war was lost in the south, were willing to start treating black people more as equals in some ways, but they had a long road to hoe to overcome years of racism.

I loved the characters of Ridley and Olivia. The book is long. It has a slow start. I’m horribly allergic to horses (not matter how beautiful I believe them to be), although I appreciate the painstaking parallels between the training of the thoroughbreds and the gentling of Olivia’s fears that Ridley undertook. The character of Grady and his  threats was a plot thread that was left hanging unresolved. When the end finally came it felt like it wound up too fast and I almost wished less time was spent earlier on to be able to more fully enjoy the way Ridley and Olivia finally connect. I felt a bit shortchanged in that regard after all the work in getting there.

If you want to live in the South, right after the civil war and see what life was like back then, this historical will do the job. Even though this reviewer is from the North, I do have to agree that much of what happened to decimate the South as part of that war was over and beyond what was necessary to win freedom from the slaves. This novel illustrates that suffering to a certain degree although taking place within the two years after the war I suspect the relationships illustrated between Negroes and Whites in this novel is an ideal and did not reflect reality (equal pay for a job?). Poetic, fictional license but it aided the story and the dignity that the former slaves deserved.

One thought on “To Whisper Her Name (Book Review)”