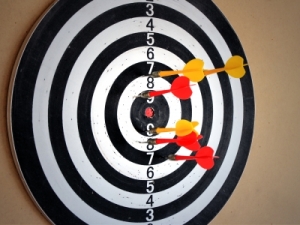 I’ve seen this situation many times. Someone gets upset about something in ministry and instead of going to the source they start talking about it with others.

I understand this too well. See, I’m human too. Sometimes it’s easier to complain than to actually approach a leader and ask questions or express my views.

I’ve been on the leadership side and let me give you an image. Being a leader is putting a large target on your back and silently begging people to shoot at you.

Those shots hurt. Even with the shield of faith and the sword of the spirit, they hurt. See most people don’t take issue with a decision, they attack the person making the decision.

Whether I’ve been in leadership or not, I have pledged to defend and protect my leaders.

That doesn’t mean I’m ignorant of their failings or humanness. It doesn’t mean I mutely accept every decision made or never voice my opinion. I do, with respect. And sometimes I don’t get my way and I back down knowing that God knows better than me and our leaders are held to a higher level  of accountability. They need our prayer, not our criticism.

It means that I will try to encourage others to take the high road. To not, however innocently, post veiled attacks on Facebook, or in a group. To go to the source and if that doesn’t work, do the Matthew 18 thing and take a friend or another person who is impartial to verify and hear out the disagreement.

Strange how people rarely gossip about the good things others do, isn’t it?

Anyway, time and again I have tried this method of redirection and even trying to suggest more positive re-framing that people could consider instead of jumping to suspicious conclusions or motives.

It doesn’t matter. The messenger gets attacked and called ignorant and people take the comments as personal slander even though they were never named or even thought of in comments written or spoken.

It’s sad that we can’t cut each other grace, speak the truth in love to the person we have an issue with and move on. I guess that’s the reason so many pages of Scripture are dedicated to the “one-anothers” so we are reminded this is not an us against them kind of issue, but it is about us growing as a body of believers to become more and more the bride (the church) that Christ is coming to wed.

I love the local church. I have spent years pouring myself out in service to her as paid and unpaid staff. To be honest though, sometimes, because of these “friendly fire” situations, I wish I could just walk away. The only thing that keeps me is that not everyone is like that. There are those who do take the high road and walk with integrity and regardless of how they feel, avoid the petty backbiting and gossip. Some of them have defended me against others who have slandered me behind my back and they suffered for that as well.

Jesus also suffered in a similar way (and far worse) by those who proclaimed to love God.

Sorry to use this as venue to whine. I want the Bride of Christ to shimmer and shine. I want her lace to be pure and clean. It’s just that those kinds of negative behaviors don’t show a good witness within the church or without. So maybe we can all try harder with God’s help and a lot of prayer for our leaders.

And I’ll once again pull out the arrows and slap on a band-aid of forgiveness and try again, even when it hurts. Because Jesus is worth it and so are His people and the mission He has called us to.

4 thoughts on “Shoot the Messenger”