Non-writers probably cannot relate to the obsession to write that overtakes an author. Some writers plot and plan everything. For me an idea, a character, or a first scene starts me off. Slowly the characters share with me their back story and as the story progresses I have no idea what will happen next. 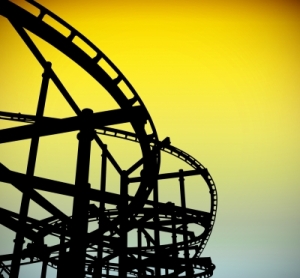 It’s a wild roller-coaster ride, but I hold on tight. I can’t avoid it as the characters will taunt me until I set my fingers to the keyboard and write.

My characters pretty much hijack my life. They hold me hostage at gunpoint with an urgency to get their story on paper (or computer). There’s a desperation that underlies the tale.

So I write. Frantically. I leave gaps and highlight spots to go back to. I think about my characters first thing in the morning and I dream about them at night.

When life calls me to leave the house to do other things–serve at church, grocery shop, mow the lawn, editing work on other author’s stories–my characters are always there.

How is being a writer different from schizophrenia? Schizophrenia is a mental disorder where the sufferer often hears voices that are not there. They might see things that are not there. Feeling and smelling things is rarer. Sometimes those voices are mean and insulting. Sometimes they deceive and taunt the sufferer. The difference between a writer though and someone with this type of mental illness is multiple:

It is sometimes said that writing is the only acceptable form of schizophrenia. That’s really not true. For one, they are not the same and secondly, schizophrenics are acceptable human beings too. They just suffer from a terrible illness that can make relationships difficult to maintain. Trust is a challenge and reality is scary.

Hopefully my books do the opposite for those that read them, in spite of the wild ride I take to get that rough draft written.