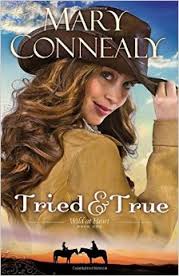 I had the opportunity to get a copy of Tried and True (Wild at Heart) by Mary Connealy in exchange for a review. Now this is not an onerous task by any means. Mary’s style of writing her westerns has always been flavored with a unique voice that adds a bit of humor to even the most challenging situations her characters encounter.

Tried and True was no exception to this as she starts a new series, Wild at Heart that I suspect will follow the adventures of the Wilde sisters who, in disguise, fought in the Civil war after their brother was killed. Their father is a bit wrapped up in his grief and they’ve traveled west to homestead using their time served to help pay for the time needed to claim a homestead.

That plan however is a bit unnerved by the fact that Kylie Wilde, the youngest sister, really likes being a woman. While wearing pants has its advantages at times, she likes her hair long and wearing skirts and dreams of a more civilized life in the East.

She encounters land agent Aaron Masterson who  quickly discovers the ruse the girls have plotted to gain their land. Can he let them keep their secret as he falls in love with Kylie? He just wants to finish his job and move far from civilization as possible.

As both struggle to reconcile their conflicting dreams with their growing attraction, outside forces threaten to tear them apart. Kylie has a choice to make to follow her heart and desire for this man over her desire for tea parties and pretty dresses. Can she give that up and live in the untamed West?

I love Mary’s writing and her characters are lively and I look forward to reading the rest of this series. This was a book that was hard to put down and I smile every time I think about it, because it was just that enjoyable. Kudos again to Bethany House for their amazing cover design.

I have always enjoyed Mary Connealy’s western romances with their high adventure and lovable characters. Stuck Together is the third in the Trouble in Texas series and I was given a free copy to read of the book for the purpose of this review.

Vince Yates has sworn to never marry. As the only law in the dead-end town of Broken Wheel, he has seen enough in his life to make him weary and cynical. He suffered horribly from the Civil War but that didn’t compare to the emotional wounds left by his tyrannical father. His deepest wounds are hidden under his rough “Invincible Vince” persona.

Tina Cahill lives with her brother, Jonas, one of the men who makes up his circle of friends. She pickets the saloon and cooks for the town at the diner and gives Vince sass right and left. He enjoys sparring with her and as one of the few single women in town, watching her walk her line all the while trying to keep her out of trouble.

Trouble comes in the form of Vince’s father, mother and a sister he had been unaware of. After he had refused a summons to come home to care for his mother suffering from dementia, they had come to him. His father high-tailed it out-of-town leaving the women in Vince’s unsuspecting care. His new sister falls for a friend leaving Tina and Vince in charge of his mother, trying to prevent her from endangering herself.

More trouble comes his way that threatens the well-being everyone he loves and Vince rushes headlong into the danger to save his friends, fearing that dementia is in his future which means he can never marry the woman he loves. They all learn hard lessons about trusting God with their future as they fight for it.

I love the complexity of Mary’s characters and the humor she adds to her stories. Danger, deep friendships and faith all weave together to give a romance and a happily ever after that will make you glad you came to Broken Wheel for a visit through the pages of this book. 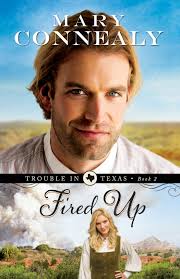 I’ve enjoyed other writings by Mary Connealy and looked forward to book two in her Trouble in Texas series: Fired Up.

Dare Riker and his friends formed a bond as Regulators at Anderson Prison during the war between the states. During the first book, they helped Luke reclaim his property and it was during that story that Dare started to fight his attraction for the beautiful Glynna.

After all, she was married. By the end of that story, Glenna was a widow and had vowed to never marry or depend on a man again. Dare has no intention of that anyway since people seem determined to try to kill him.

Then there is Glynna’s teenage son who is determined to protect his mother at all costs, even if it involves any man who was dare to mistreat her . . . and maybe even kiss her.

Dare has his hands full with measels, fires, a knifing and a former patient with a vendetta against him. Through it all, and in spite of Glynna’s tendency to cook things to overdone, they both start to change their minds about each other.

I love the stories Mary weaves and the friendships that these men have as they help each other and do not hesitate to speak truth. The faith story is organic to the characters and the I look forward to book three which I suspect will be Vince’s story. After all, what fun is the wilds of Texas if the men can’t find wives and have an adventure getting to the altar?

If you like Mary’s writing, you’ll enjoy this story. 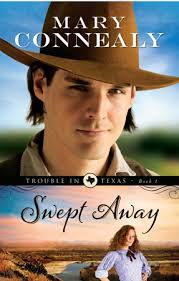 I enjoyed the antics of the Kincaid brothers and their brides so I looked forward to reading Mary Connealy’s latest venture, Swept Away.

I was quickly swept into the story as the heroine of the piece. Ruthy McNeil is a scrappy little thing and far tougher than I would be given the challenges she was dealt. For all that she was a trusting soul as well when rescued, after being swept away in a flood,  by a total stranger in the handsome package of Luke Stone.

Having rescued Ruth, Luke figures the only thing for him to do is take her with him, hoping to find a place for her before he fights for his ranch.  They meet up with a band of friends with deep bonds forged in Anderson prison where they served as “Regulators.” There they had been in the difficult position of keeping order, even amongst their fellow prisoners which some saw as traitorous.

These men have noble character and willingness to risk all for each other. Ruth comes to respect them and buys into their cause, whether they like it or not. Throw in an abused wife and action bursts forth until they are all swept away.

I liked the historical aspect of delving in the bond forged by men in prison during wartime. To deal with death and deprivation as well as the other dangers inherent with desperate men, these men emerged with honor intact and a desire to do what is right above all. The added sub-story of domestic abuse highlights the challenges many women faced in the brutal west. Abuse was not reported and who would interfere with a man’s right to control his wife? These men, however, refused to turn a blind eye and it becomes more important to rescue the victim above claiming the stolen property.

There are traces of humor as well in this story. I love that these simple men can have such cute thoughts and Luke tops them all, especially in regards to his new, and unexpected wife. It’s a sweet thing to watch their relationship.

I look forward to book two in this series which takes up Glynna’s story. Poor Dare. He’s got it bad. It will be fun to see how this pioneer woman who has been through so much will fire up the local doctor. It will also be fun to see the friendship between Glynna and Ruthie develop. 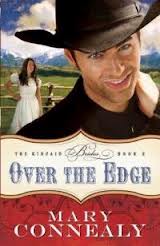 I had previously read the first book in The Kincaid Brides series and somehow missed number two before having an opportunity from Bethany House to review Over the Edge, another great novel by Mary Connealy and book three in the series.

I worried for a fraction of a second that I might have a hard time with having missed book two but that was not the case. I didn’t feel like all history  of the previous stories were retold in this book but enough that there was a solid sense of the family that the Kindcaid brothers make up and the unusual way they seem to have in acquiring wives.

A western romance taking place in Colorado, this story centers on Seth, the “crazy” brother who grins even as a woman is ready to aim at him with her rifle. He takes in the information that he is married without doubting much that it could have happened, even if he cannot remember it! Seth is truly a crazy nut of a hero but adorable for all his brokenness and pain and this story follows his rocky past, regaining lost memories, winning the trust of his bride but also finding healing for that little boy deep inside who has been tortured for years.  Add in winter,  a new-found younger brother, a son he didn’t know he had and a man eager to kill to get his hand on some diamonds all taking place around some deep and dangerous caverns and you have a wild ride of a romance and several moments of smiles along the way.

This book left me in a happy place when I finished – and that’s a lovely place to be. Definitely a fun read with lively characters! Thank you Mary for providing a wonderful romanc