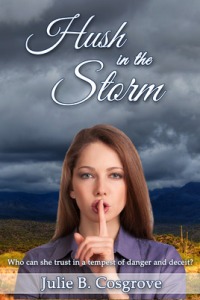 I was given an opportunity to read Hush In the Storm by Julie Cosgrove, because someone knew that the subject of Human Sex Trafficking was something I was concerned about.

Jen is wallowing in grief long after her husband’s death. She had loved him and regretted some of the choices she had made in a relationship with him. Why had God done this to her? Late one night her life took a dramatic turn. If she thought things couldn’t get worse she didn’t have an imagination big enough. A dinner date with a coworker in the midst of a storm. She finds herself kidnapped and on a dangerous adventure into the ugly underbelly of human sex trafficking.

Can she trust that Tom is who he says he is, and that he is only fulfilling a promise to her deceased husband, and trying to protect her? Has she only imagined hearing her husband’s voice? Meeting young women who were trafficked jolts her world, especially when one is pregnant.

I don’t want to give any spoilers away in this complex and suspenseful story of betrayal, fear, romance, injustice and intrigue. Can Jen trust Tom and the growing feelings she has for this man? Can love bloom in the midst of such deceit as she tries to unravel the truth of her husband’s life and deal with the reality of what she lost, which was far greater than her marriage? This book is hard to put down but will open your eyes to the dangers and struggle for freedom so many are facing in our country today.

I look forward to the sequel, Legitimate Lies, due out in January 2015.

One thought on “Hush In The Storm (Book Review)”