I’m not good enough. Is that a common fear or something only I struggle with? I had a negative interaction and at first was thinking, “why can’t this person just get along with me?” I felt disrespected.

Then it hit me. Maybe the issue isn’t him. Maybe it’s me. In spite of thinking I’m respectful, competent and have a right to be heard on an issue, what if instead I’m coming across as arrogant and I’ve frustrated and hurt this person instead?

How does one not take failure personally?

Respect is a huge issue for me.

Once I confronted someone for the lack of respect they were showing me. They had been saying negative things about me behind my back and I caught wind of it. It had happened before so I addressed the issue. Her response? She laughed at me.

Another time I told a person how I had felt I had been disrespected by her. Specific instances that were clear. She looked at me and nodded and said, “Yes, I did all those things. But it’s your fault.”

Let’s get this clear. Both of these instances were verbally/emotionally abusive. The responses these women gave were intended to demean me and strip me of any belief that I deserved respect.

And to be honest, I’ve had way too much of that in my life. And it hurts. And even though I forgive, the pain lingers. 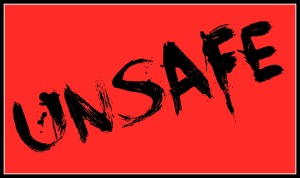 In my mind people like this have a stamp on their forehead that says: “Unsafe.” Yeah, really. I can almost see it.

I have had many more conversations though that didn’t end so badly. I disagreed with a leader and I told him why and how I felt about his decision and he listened and apologized for not taking into consideration my feelings. I let it go. He had my full support through however his decision ended up. I have great respect for him years later and in relationship to him, I’m good enough.

Another person I sat down face to face with and said, “You apologized and I forgive you but I want you to understand how your actions affected me.” When I’m working with him I know, that even though I make mistakes, I’m good enough.

So why am I on this today? I think the enemy likes to dredge up those hurts, some that continue daily in my life, and tell me that they are the truth.

I’m fighting to believe it’s a lie. Scripture says I’m good enough to do the work God has called me to do. Will I do it perfectly? No. I’m okay with being human (most of the time). I’m okay with apologizing when I screw up.

I struggle with depression. I’m also an author and sometimes the pain of my characters is my own and writing about that scrapes wounds raw as I explore them more deeply. To not be good enough to be wanted or loved. Isn’t that a deep fear for everyone?

Thankfully God doesn’t look at me like that. I’m good enough because of Jesus. And I’m becoming better as I lean on Him and let Him continue to lead and guide me, even when the outcomes hurt. The pain of art. The pain of life.

I’m good enough and I am blessed that for every “unsafe” person there are many more who are-especially Jesus.

3 thoughts on “Not Good Enough”