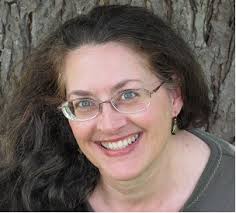 I’ve read and reviewed several books by my friend, author Lisa Lickel, so when she asked about a re-do of a previous book, I jumped at the chance. Once I started reading Healing Grace though I quickly realized that this book was different from the rest. It’s not a mystery. It’s not necessarily a romance. What it is, is spellbinding as it drew me in and I couldn’t be satisfied until I got to the last page (which means yes, I read it all in one day).

Grace Runyon has faced overwhelming losses and burdened with guilt over the last of them, the death of her husband to cancer, she runs away from her Tennessee town to a tiny place in Michigan. Grace has known from a young age that she had a spiritual gift of healing, but it had not saved her husband. While no one else blames her for his death, she cannot forgive herself and struggles with God, the giver of the gift, who had withheld it’s power.

Impulsively buying a little cottage home, she ends up neighbors to the Marshalls and faced again with the need to heal as Ted is suffering from an unnamed illness that is debilitating and will eventually kill. She falls in love with Ted through his son Eddy, a little boy who captures her heart but also stirs the grief of the little boy she had lost herself due to a car accident.

Grace decides to re-enter the work world as a physician’s assistant and at times finds her gift of healing being exercised in secret at the clinic to help her patients. This comes at a cost however. Some healings cause her deep emotional and physical pain that mirrors her patient’s agony, although recovery is quick. Soon many in the town question whether she is a witch, although her gift has never brought harm. Coupled with her perceived failure in her past, self-doubts arise and Grace faces a crisis that tears apart her soul.

I don’t want to be a spoiler for the story. It is a worthy read and one I hope to read again. Lisa’s dives into a minefield of emotions as well as the theological minefield of spiritual gifts since some schools of thought believe certain gifts like healing are not for this age. I disagree. I was impressed by her balanced view of spiritual gifts. Gifts are from God. They are used for the church (body of believers) and they are not used at our will, but His.

Gifts sometimes come with a cost as we serve and pour ourselves out as an act of worship. Grace illustrates that powerfully.  The final scene of the book is riveting. You can disagree if you want about the dispensation of gifts but let’s be clear, nothing Lisa writes indicates a “psychic” or “satanic” power at work. Is it real? It’s fiction,  but I wouldn’t put it past God to work in the way she describes.  For this I applaud her because she masterfully illustrated biblical truths: like love requiring sacrifice and the challenge believers all have to set aside self and pride, and even the desire for the love and affirmation of others, in order to be used.

I’ve enjoyed all of Lisa Lickel’s novels that I have had the privilege to read. Healing Grace, however, is by far the best of them all.