This piece was written during my paternal grandfather’s time in India in World War II – as part of a journal he kept. I had this read at my wedding, which he did not live to see. He was a hero, a gentle and gracious soul and I still miss him all these years later. 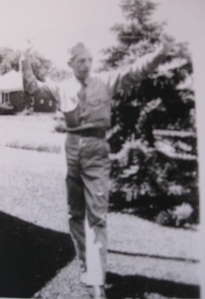 Nightfall is once more preparing to enshroud Assam in its blanket of pitch darkness. An American soldier sits alone in his tent on the edge of his canvas cot, his heavy G-I shoes unlaced to cool his burning feet, a cigarette smoldering listlessly between his fingers.

He gazes out at the lengthening shadows in the nearby jungle. He listens to the weird cry of the small jungle wild life – and the insects. He becomes aware of the steady purr of the diesel generators which run constantly day and night supplying power for the small garrison.

Outside he hears the crunch of the guard’s boots on the gravel path as he starts his first tour of duty around the area on his long night vigil keeping his sleeping buddies from harm.

He hears the steady drone of jeeps and trucks racing back and forth on the nearby Stillwell Road. A G-I in a nearby tent is strumming a guitar and singing Western songs softly, while another next door makes a feeble attempt to blow some jazz out of a squeaky clarinet.

The generator coughs and sputters, then catches again and continues on and on with its steady rhythm.

The soldier’s eye falls to on a picture of his family, of which he has been thinking. The children’s locks of hair are in the little frame. He looks closely at it, then back at the picture. He wipes the mold from the leather frame and replaces the picture in its spot on the crude rough cupboard he has made. He continues to look at his pretty young wife and sees many things – First, the woman he is so deeply in love with. His mind flashes quickly back over the few preceding years and he is doubly homesick. He also sees the mother of his children – the financial wizard who makes ends meet somehow on a meager monthly sum. He sees the wonderful cook, who in happier days planned and prepared his menus. He sees many things in that wonderful wife. In his children he sees the happiness of days past and in those to come.

The tent door slams and the Sergeant from Tennessee appears, whistling loudly, “Flying Home.” He reaches over the rough table, snaps on the light and suddenly becomes quiet. His happy mood has been killed by the sullen expression on his friend’s face.

A dull reply of “Yeah. . . “ and the cigarette is ground into the concrete floor. For a moment, silence, except for the sounds of nature – and the machinery.

The Sergeant breaks the spell again, “Let’s get out of this rat trap, wander over the day-room and I’ll beat the pants off you in ping-pong.”

The door slams – the two men walk down the narrow path together, staring into the black jungle ahead. Neither man speaks. . .they are thinking. . .