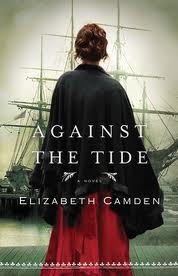 Elizabeth Camden’s latest book, Against the Tide is billed as Historical Fiction. As a sub-genre it is a romantic suspense as well and a hard book to put down once you start reading it.

Lydia Pallas is an unlikely heroine. Orphaned at age nine with very little understanding of English she grows up in an orphanage but  is quick to learn languages. Once out on her own she craves stability and security and finds a position translating for the Navy.  While serving in this position and in desperate need of money to save the only home she’s ever felt was her safe place to be, she meets the enigmatic Alexander “Bane” Banebridge who hires her for translation work that seems like foolishness. Desperate for the money, she engages in the work but along the way falls in love with the man.

Bane is on a mission to rid the world of opium. Having been held captive and eventually apprenticed to a master shipper of this substance he is now free on a new path of redemption after meeting Jesus. He needs Lydia’s help but can he survive the emotional connection he feels for her? Can he win his war without losing the woman he loves on the way?

Lydia has her own battles to face that could ruin any chance of a relationship with Bane but she steps out of her comfort zone to take on a risky task to not only save someone else but hopefully a future with the man she loves.  Will she survive her many challenges and will Bane still be there to love her when it’s all over? Will she understand the grace that God gives to those who seek Him?

This book was hard to put down and a riveting read to see the prevalence of opium being fed to the general population in the late 1800’s in the United States.  Reformation of this wrong was slow and painstaking and fought by people with great courage. This book is a worthy read and far more exciting than the front cover would indicate.

Two years ago I attended the Leadership Summit that Willow Creek Community Church puts on. I love learning more about leadership and God always has something profound to speak to my heart about at these events, usually on a more personal level than in how to lead better.

But good leadership ultimately begins in the heart.

Leadership in the Christian context ultimately begins with being able to follow a leader – Jesus.

God revealed to me repeatedly how much fear I had about the path he had me on. Fears I could do nothing about. He also showed me that often in His word the concept of courage was coupled with the words “Be not afraid.”

Courage means stepping forward in spite of our fears. If it were easy courage would not be necessary.

At this conference we were given broken pieces of terracotta pots. As we sought God in prayer we were to write on the clay, His words to us.

Mine says “Your courage, my obedience.”

It hit me then that courage really isn’t mine. I do not have it in my flesh to persevere against difficult odds. It is only something I can do as I submit myself to God and obey and let HIM deal with the consequences of those actions. He knows better than I do what those ripple effects of obedience will be. I have to trust Him for the results. My only job is to obey what He leads me to do.

A year and a half later I still look at that and remember. I’m challenged once again that I have to cast my fears at His feet and step into the scary work He sometimes calls me to. Ministry is hard and it has a cost and if we think differently we are probably not following God. It should scare us. It should stretch us beyond what we think we can do. God calls us to live beyond ourselves often so that we are forced to depend on Him.

Last year I stepped into being even more serious about my writing. I stepped down from leading a ministry to write more because God called me to. The minute I decided to obey, God started opening up doors and affirming my choice. When my ministry responsibilities were done, instead of feeling a loss, I felt a huge weight off my shoulders and greater freedom to lean into His calling on my life – to write. To encourage. To redeem some of my pain through words. He pushes me further with every step and fear rears its ugly head and I’m reminded once again that it’s HIS courage – not mine.

My job is to obey regardless of how I feel.

Having said that, in what ways are you being challenged to obey, and what’s holding you back?