Prism Book Group is releasing several Christmas novellas about cowboys–just in time for the holidays! Since they all release today, I had no choice but to give them to you all in one post.

Mary Ball has written a sweet story of love and faith with A Love Valley Christmas. Susie Aleman is a widow running a mercantile in Love Valley called Spurs. When she’s not working she’s raising her sixteen-year-old son, Zam. Life is comfortable with her work, friends, and faith. When newcomer Ty Porter strolls into her store Susie’s heart beats faster.

Ty’s not looking for a love connection. He’s made his mistakes in his past and faith isn’t something he understands. But it’s just possible that Christmas, a sweet woman, and her son might just hold the life he’s been searching for.

When Susie Aleman isn’t running Spurs, a mercantile in Love Valley, she’s raising her sixteen-year-old son, Zam. She’s content with life and relies on no one but God. Then Ty Porter moves to Love Valley and stampedes into her heart.

This isn’t your young love story – but is a sweet tale of reluctant love over the holiday season.

In Crazy Woman Christmas, author Renee Blare brings us a unique Christmas tale. Bianca Kolceski has made her share of mistakes and after running away from her parents in shame. Having turned her life around, she’s finally decided to return home to Texas for Christmas. A blizzard in Wyoming forces her off the road.

Devon Dawson doesn’t do Christmas as he grieves the loss of his parents. The cowboy is on his way home to hunker down during the storm when he spies a little car buried in the snow. Helping out Bianca he has no other option than to take her to his ranch.

Life is hard in the blizzard and two strangers with painful pasts learn about faith and love during the Christmas season.

Nancy Bolton has given us a wonderful story in Hats Off. This cover is different from the others because it is historical taking place in Oregon in the 1920’s. Kay, a widow, has moved there to be with her brother and his wife. She works making shirts and the lining for custom hats. She’d known love once but could there be a second chance for her?

Aaron is a quiet man who does his job but one night gets drunk and is discovered by Kay who gets her brother Philip to care for the man. He intrigues her in their fiew shy interactions. She steps out and tries new things including challenging the quiet man with his own dark past. Their brief interactions ignite sparks quickly.

Love bloom in the cold of winter as both learn that sometimes, hope at Christmas, is a powerful thing if one is willing to reach for it.

Julie Cosgrove’s latest release is a Texas story that takes place in Hill Country Homecoming. Sarah Mansfield is used to living large on her daddy’s dime. The only reason she’s returning home to the ranch is for the annual holiday party and announce her engagement to a rich man, Trey Simpson. The down side is having to see her father’s ranch manager, Travis Wallace, a guy who she sees as a loser. As her dreams are about to come true a harsh reality snatches it all away as responsibility for the ranch falls to her.

Travis sees the beautiful Sarah as beautiful but impossible. But when push comes to shove her perseverance in learning the ranch business begins to earn his respect. As he answers questions about the true meaning of Christmas, he begins to wonder if Sarah might not be the girl for him after all. But only a miracle will convince him of that.

A Christmas love triangle filled with suspense, faith and love. 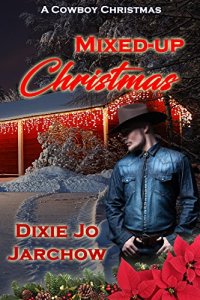 Dixie Jo Jarchow gives us a sweet tale in Mixed-Up Christmas. Mix Malone is done riding bulls. He’s broken too many bones, suffered too many head injuries to ride anymore in spite of the fame and fortune it has provided for him and his family. He pulls into town in the middle of a snow storm and stops at the Outlaw Cafe.

Blossom Deavers isn’t quite sure what to do with the beaten up cowboy who passes out in her empty cafe. When his family begins to threaten him as she simply befriends the cowboy and listens to his own dreams as hers are falling apart, she decides maybe it is time to move on. Christmas isn’t about dreams anyway, is it?

This is a story about broken dreams, broken families and the hope of Christmas and courage. 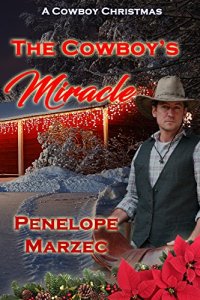 Penelope Marzec brings us The Cowboy’s Miracle. Rodeo star and veterinarian, Seth Holmes is running from men who are hunting him down, due to his father’s crimes. He searches for a home that might belong to grandparents he didn’t know he had but instead finds Gariella Cavallo.

Gabriella has been living on the farm of a woman who had been like a grandmother other and Seth threatens to upset the security of her future in raising alpacas, managing a greenhouse and carriage house that she rents out.

When someone targets the alpacas, Seth’s veterinarian skills come in handy. But can Seth penetrate the wall of fear around Gabriella’s heart while protecting her from those who are pursuing him?

If you like novellas with cowboys during the holidays, any and all of these novellas will fit the bill. I give each one five bones because I’m a dog, and that’s how I roll.

Spatzle the Maltese here (in case you’re new to my reviews). Sparks of Love is a novel of love and faith by Mary Ball.

Once upon a time, a young adult was accused of a crime. She left her past and her faith behind when her small town continued to judge her in spite of her innocence. Her father calls to let her know he found proof that would clear her name. He’s interrupted before he can share the news.

Her father dies before he can do so and Lynette Cunningham is forced to return to settle the estate and decide what to do next in her life. An old friendship is resurrected and a local pastor has his sights set on her. She’s determined to get through all the stuff her father saved and hopefully find the proof of her innocence her father mentioned. A series of accidents begin to make the process difficult.

The handsome young pastor also challenges her buried faith as she digs up memories. As love grows danger increases. Lynette is challenged to rethink much of what she thought she knew about her old life.

This is a book of grief and broken trust that is restored through faith and friendship. A compelling journey and a worthy read. I give it five bones because I’m a dog. I don’t do stars.