Andrea Boeshaar is a prolific writer and gifted story-teller. This trilogy of novellas in one package illustrates that beautifully. Seasons of Love is a trifecta of contemporary inspirational romance.  And for a limited time the ebook version is only .99! Merry Christmas to YOU!

The first novella, An Apple a Day takes place in summer. Dr. Brian Coridan is taking a break from his private practice. While in Blossom Lake, Wisconsin he becomes infatuated with the local health food store owner, Talia Fountain. Their philosophies about medicine are at opposite ends of the spectrum and yet sparks continue to fly between them. A sweet romance that is just what the doctor ordered. And a recipe for apple pie is included!

The second novella, September Sonata, tells the story of Krissy and Blaine. They  have entered the empty nest season of life. Set in the Milwaukee, Wisconsin area, Blaine is recovering from an accident while fighting a fire. Pain is his constant companion but he loves his wife and can’t understand what’s gotten into her. Krissy is bored in the marriage and when the new Christian school principal shows interest in her she struggles inside. Does she honor her vows and what would staying married to Blaine look like in the years to come? Andrea has a sweet surprise  for the reader and a spicy one as well in a chili recipe at the end of the story.

While I’ve enjoyed all the stories, for some reason the last one is my favorite.

In Let it Snow, Shari Kretlow finds herself stuck in a snowstorm, on Christmas Eve at the home of the family of the man she deserted long ago. She’d run off with another man but life and marriage were far from happy for her. Now a widow with an unspeakable joy and determination to live life happy, she’s confronted with the man she left. Dr. Brenan Sheppard never really recovered from Shari’s betrayal. Home on leave as a missionary in Brazil he’s on the cusp of proposing to someone else. Shari’s appearance brings up old feelings he thought he’d buried. Now he has to decide what to do with that. Can love lost be restored? This story includes an egg bake recipe at the end of it.

If you like stories on the shorter side with a sprinkle of love, faith and food woven in, you’ll love Andrea’s trilogy. 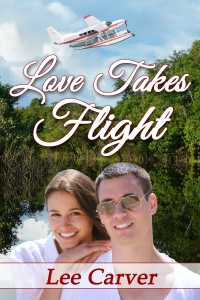 Love Takes Flight is the latest novel by Lee Carver. Her first offering was a historical World War II novel called A Secret Life. This story, while contemporary romance is no less filled with adventure!

Camille Ringold is an American nurse whose dream of marrying a doctor and living a fine life in the suburbs is destroyed. To escape the shame and give herself time to heal she volunteers to serve for two weeks in the Amazon. She is forced to face the harsh reality of life in the jungle and the desperation of the lost souls she learns to love.

On a mission of mercy the Wings of Hope plane is hijacked and she and missionary pilot Luke Strong barely make it away alive but have to survive in the jungle. Luke has been a challenge for her, a woman used to finer things and afraid of flying. But his faith compels her to dig deeper within to seek God’s leading. Her heart plays tug of war with the growing attraction to the handsome pilot and her struggle to give up on the more comfortable life she temporarily has left behind.

Returning home she is confronted with the persistent pursuit of the rejected lying doctor and she discovers that the dangers of the Amazon are nothing compared to what was waiting for her at home from this man.

Does she have the faith to risk it all for love? Is that even what God is asking of her or is it another escape? And as much as she adores Luke Strong, would he ever consider her as a possible partner in ministry and life?

This is a fast paced book filled with adventure and a realistic look at the hardship faced by those who serve indigenous people groups who desperately need to hear the gospel. I loved the way Camille’s struggles are portrayed. No idealistic dreams of saving the world but the reality of just how much sacrifice is involved is told with brutal clarity. Luke Strong is not a perfect hero either but is steadfast and lives up to his name as he protects and guides Camille . . . only to find him being saved by her dedication.

I loved this story and highly recommend it. Lee Carver is a master story-teller with an eye to detail that will make you feel like you are right there with the characters. 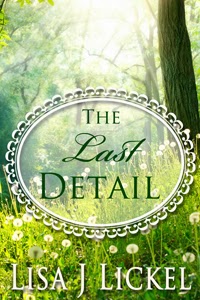 The Last Detail is the most recent work of Lisa J. Lickel and while billed more as women’s fiction, it has a nice romantic thread to it.

Merit is a medical missionary who is injured on the field and sent home to recover. The only problem is, the mission board refuses his request to return to the field. Cast adrift and trying to figure out what to do with his life, he moves into a large empty home that is an inheritance left to him and his sister. While struggling with his value and direction, he is intrigued with Amalia who has taken on the task of managing final details of the estate that the house is a part of.

Amalia runs a business called The Last Detail, (hence the name of the book), that helps people with other end of life planning beyond the funeral. She is stuck in a relationship with the funeral director, Hudson, who assumes they will marry. Can Amalia break out of her rut and embrace a larger life than the one that had been prescribed for her by her parents and business associate? Perhaps one that takes her beyond the borders of her city?

Both characters have to struggle with their relationship with God and with each other as obstacles continually emerge to confuse and complicate their lives.

I don’t want to give any spoilers away! Just read the book and enjoy the story as it unfolds. This is a well-crafted story that has hung with me for days after reading it.