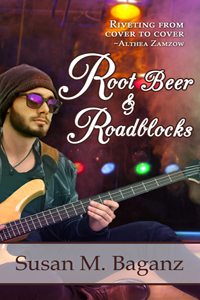 My mom (Susan M. Baganz) writes books. In this one, she had a little boy and I love little kids so Root Beer & Roadblocks is a story I enjoyed. Johnny Marshall is a favorite character, but I was sad that at the end of Feta & Freeways, Johnny’s cancer had returned. I knew then that she would write Johnny’s story and make it a great one.

Johnny had a rough time because he endured a bout of cancer in his past and discovered the truth at the same time his wife served him divorce papers. He’d had his chance at fame as a musician and lost any chance to fulfill his dream of having children.

He sold his home and had moved in with his cousin. Partly because he didn’t see any point in keeping it when he figured he’d likely not survive this cancer battle. He wasn’t even sure he wanted to bother with pursuing treatment because he knew it would be brutal with no guarantee of a cure. He serves at church teaching little kids in Sunday school since he can’t have any of his own.

When he saves a little boy from being hit by a car after church, he gets injured instead. The crash reunites him with an old flame from high school. The one woman, Katie, he never really got over and she holds a secret, one that might give him the will to live.

Johnny is not a victim in this story although he suffers terribly. Matter of fact, in spite of his challenges he often emerges the unwitting hero. His journey and struggle seems hopeless at times, defeated by depression, illness, and cancer, he also finds that because of his struggles there are amazing blessings to be had on the other side as God opens the floodgates to fill his heart (and arms) with more than he could have hoped and dreamed for.

Johnny is still a musician and singer with Specific Gravity although they don’t tour in this book as they make time to allow Johnny the opportunity to fight this battle with his family, friends, and Orchard Hill church by his side. If you enjoyed Feta & Freeways you’ll enjoy the continuation of the relationship between Niko and his cousin Johnny in this story. While both books are connected they can be read as stand-alone novels.

I would suggest that Johnny and Katie get a dog, but given the end of this story, I suspect they’ll need a bigger home and some time to adjust to all their blessings. I’d offer to join them but I love my mommy too much and she needs me. They don’t call me a rescue dog for nothing. I give this book five bones, because I don’t have thumbs and don’t do stars. And I’ll give my mom lots of kisses as long as she keeps rubbing my tummy.

I will admit, I’ve called it Duck Tape. But when my husband complained I was able to prove that there really was such a thing.

When I served in our church helping with set up and tear down, duck/duct tape was the miracle tool. You can fix a lot

of things with duck tape. We found out from our doctor that if you have a plantar wart – put a piece of duck tape on it and eventually when you pull it off- the wart will come with it (we haven’t fully proven this to be true yet).

I used to carry duck tape in my car. See I had a child who decided that he was smarter than those complicated five point harnesses I would wrestle with to get him in his car seat. So he would undo them. While I was driving.

So I would pull over, put him back in. He would unbuckle.

I would pull over again. Buckle him back in. He would escape.

I yelled, I threatened and one day I sat for over an hour while one child fought me on this. I think the people whose house were in front of thought we were stalkers.

Someone told me “You have a counseling degree, why can’t you figure this out?”

Um, yeah. Right. Like a degree automatically means I know everything? Hello people!

So I figured I needed to find a foolproof way to keep my escape artist kid in his car seat.

All it took was ONE TIME. I buckled him back in and then strapped duck tape around him to the chair (not touching any skin). He couldn’t move. He couldn’t get his hands close to anything. And I made it home with him safe and secure.

After that, when he started to unbuckle I would lift up the roll of grey tape and ask him if he wanted me to duck tape him into his seat. He would whimper and stay put. Whew!

Funny thing is, He was never a kid who escaped his crib at home. That would have taken a  whole lot more duct tape.

Error: Twitter did not respond. Please wait a few minutes and refresh this page.